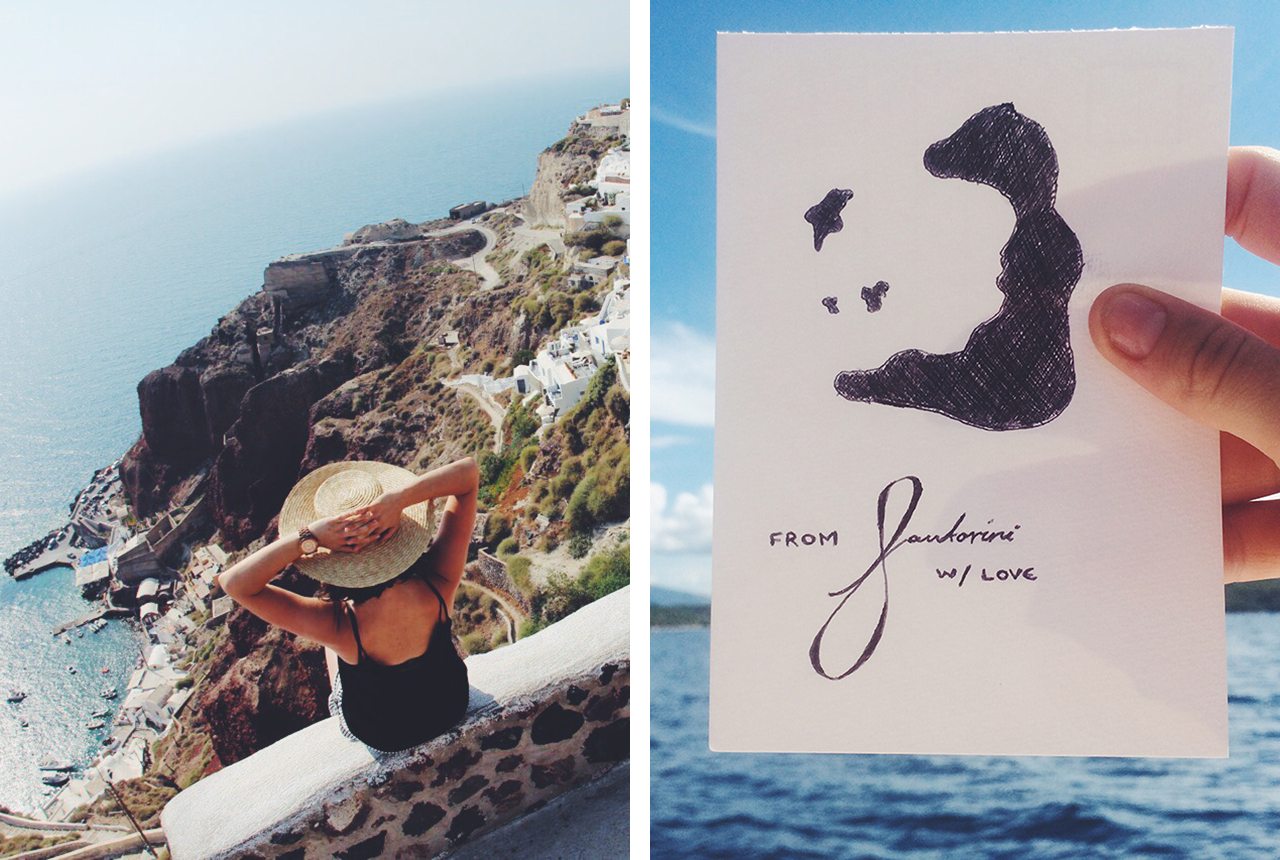 It started off with an Instagram post – Mykonos or Santorini?! And the response was unbelievable – a lot of strong opinions coming from my well traveled Insta-pals. 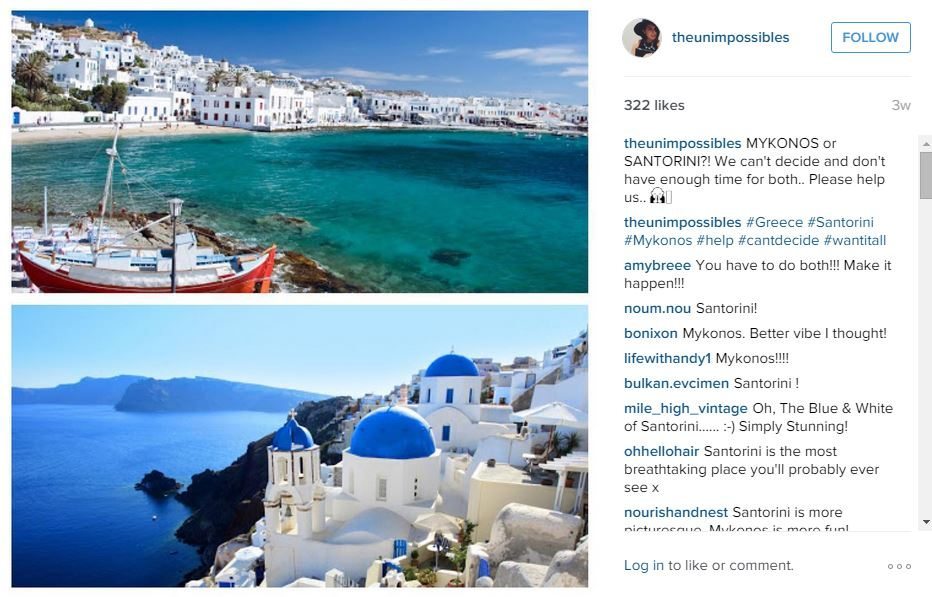 Some of the answers included:
@ohhellohair Santorini is the most breathtaking place you’ll probably ever see x.
@nourishandnest Santorini is more picturesque. Mykonos is more fun.
@angelscaroulisMykonos!! Too many people in Santorini and Mykonos is just as beautiful!
@amybreee You have to do both!!! Make it happen!!!

How could I not go and see for myself? 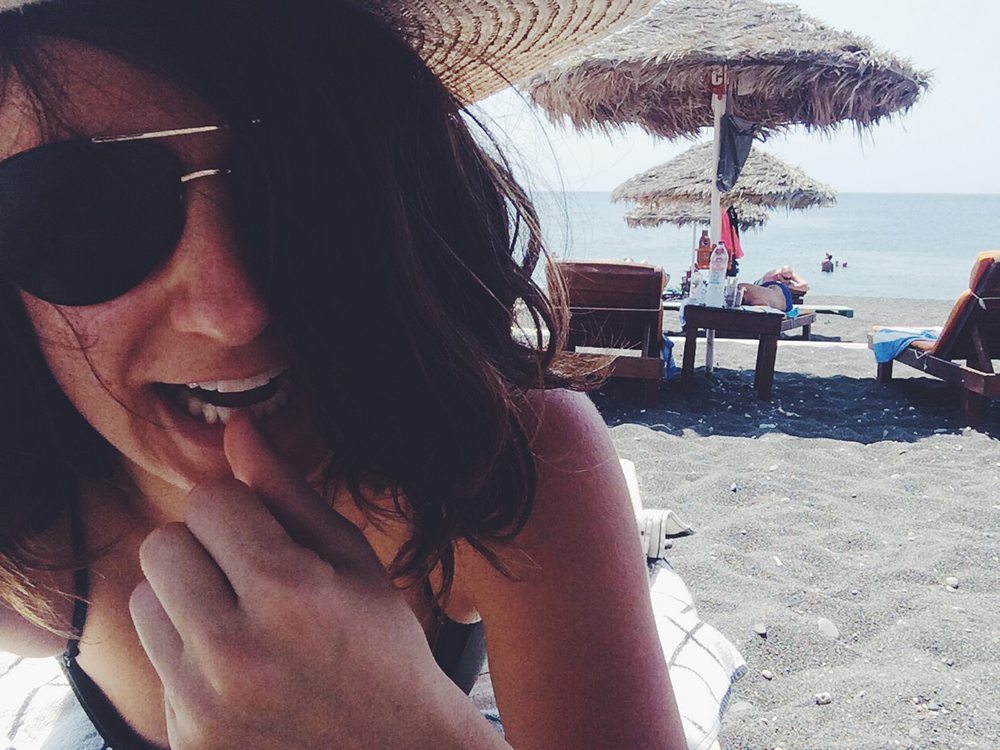 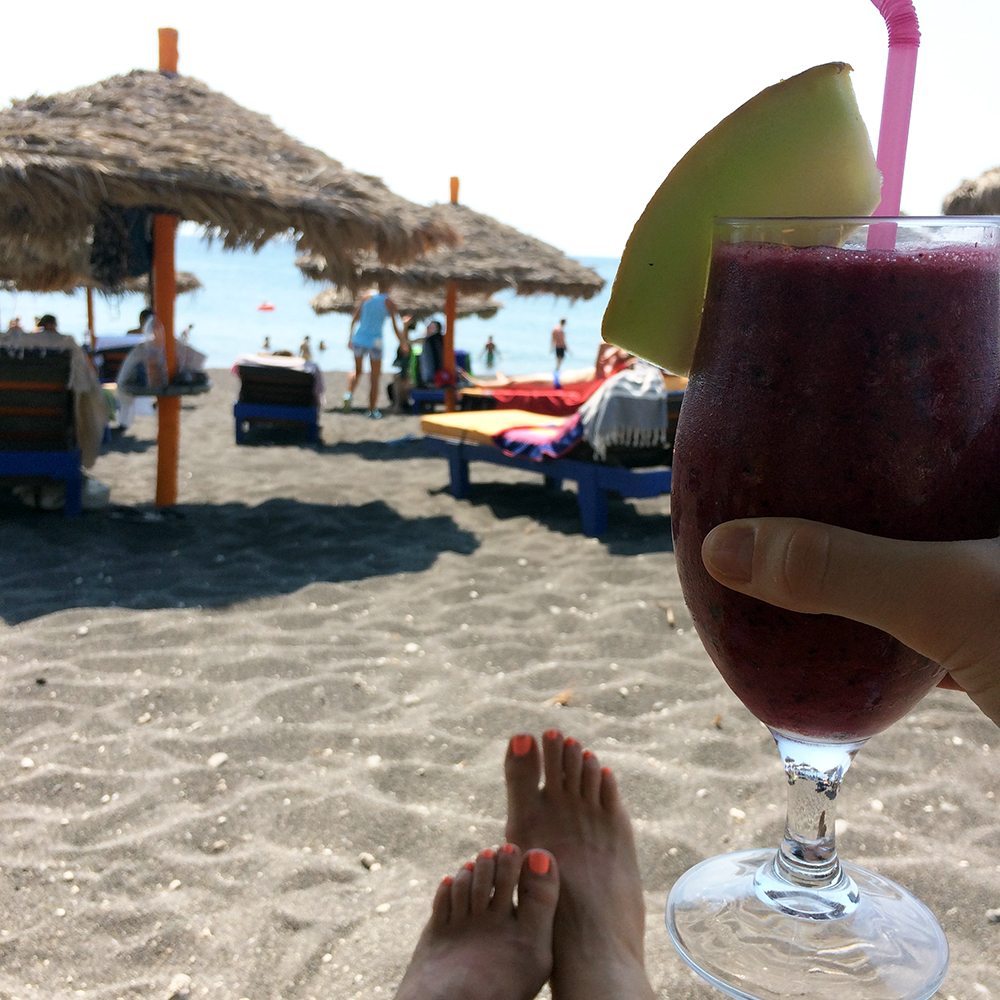 From Athens we took a long ass five hour boat ride to Mykonos. Without WiFi onboard it was up to Cat Spanish and American Gods to entertain me. Additionally I had a go at my travel companions super hard Sudoko with ambitions to finish it before trips end.

Mykonos is definitely what they say – endless coasts of beaches all aimed at the partying tourist. 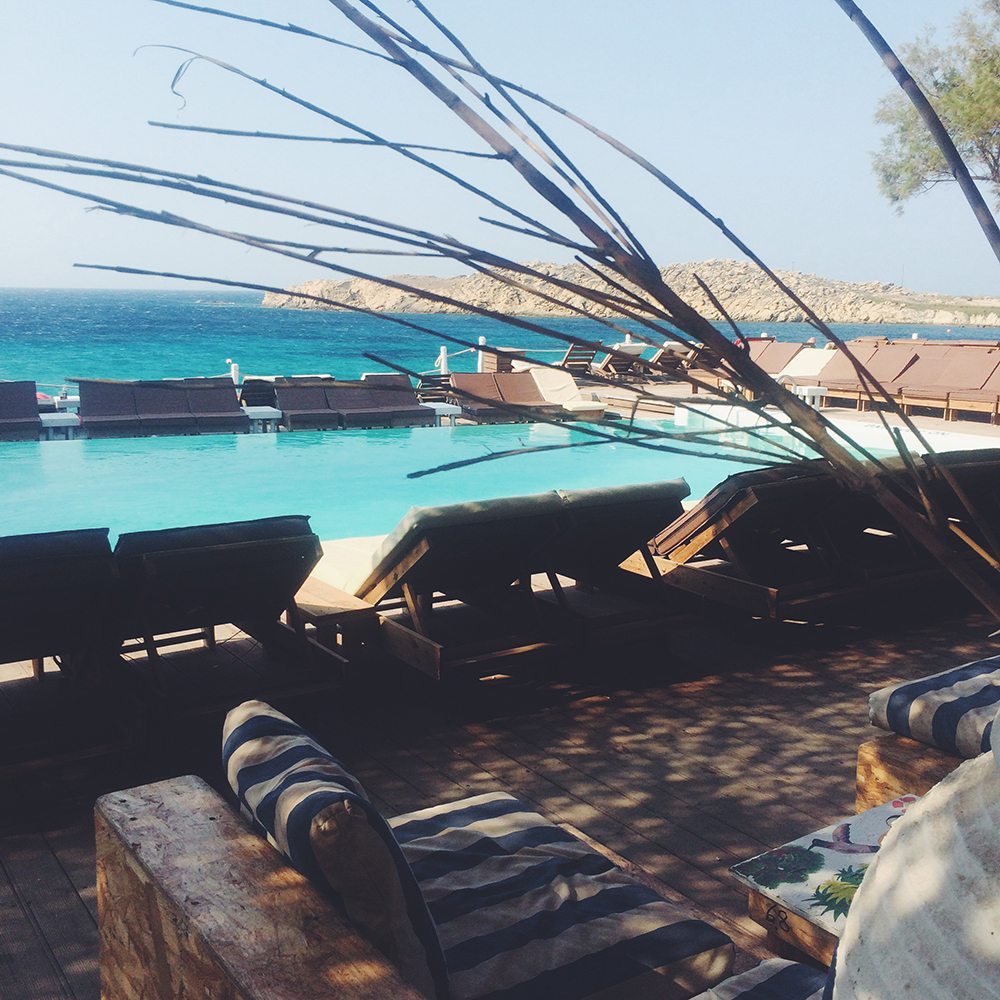 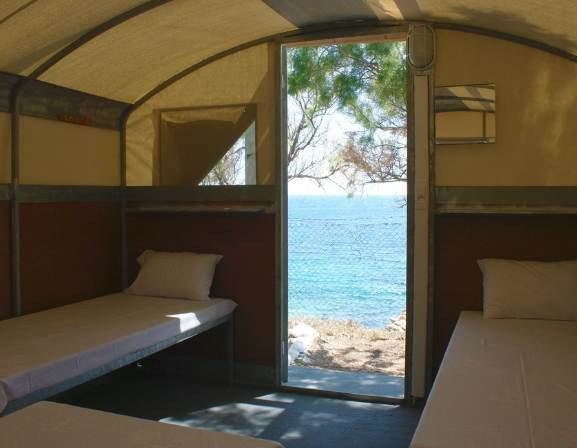 We stayed at the Paraga Beach Hostel – dirt cheap and well.. Dirty in every way. It’s a campsite not unlike M*A*S*H with its small bunkers with single beds in each room. Toilets and showers are communal and were bit of a walk away from our room but it did make it feel like we were on some camp which was actually rather fun. The DJ kicked off poolside with tunes from about 8am which was a nice way to spend the morning – eating fruit salad and drinking Cafe Freddo’s while watching the ocean and listening to Drake remixes. There was even yoga going which I couldn’t help but join in on.

Basically the rigueur du jour is to hire a quad bike and go for a burn around the island. So we did – there is something really amazing travelling on the back of a quad in your togs with wind in your hair and nothing but sun surf and sand to look forward to. Hire cares are a bit exxy and there is nowhere really to park so the small quad can be pushed into any tight parking spot with ease. 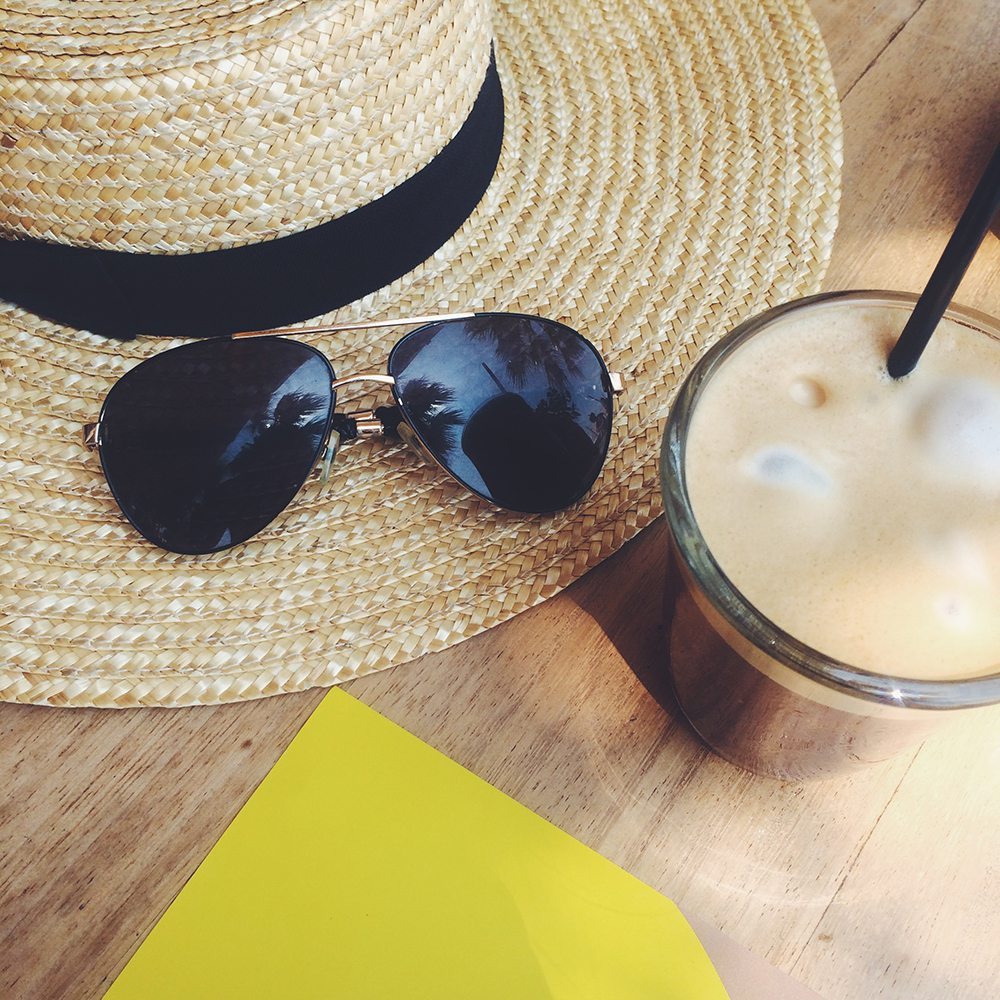 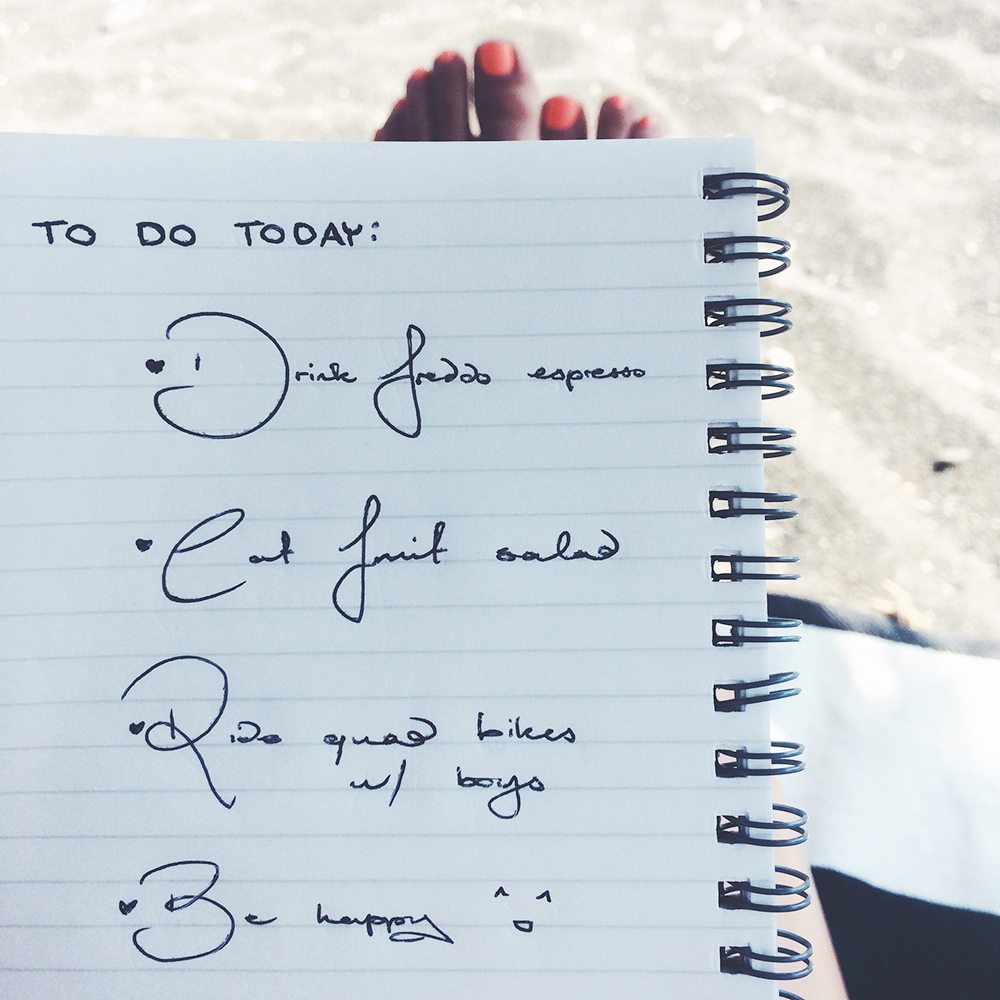 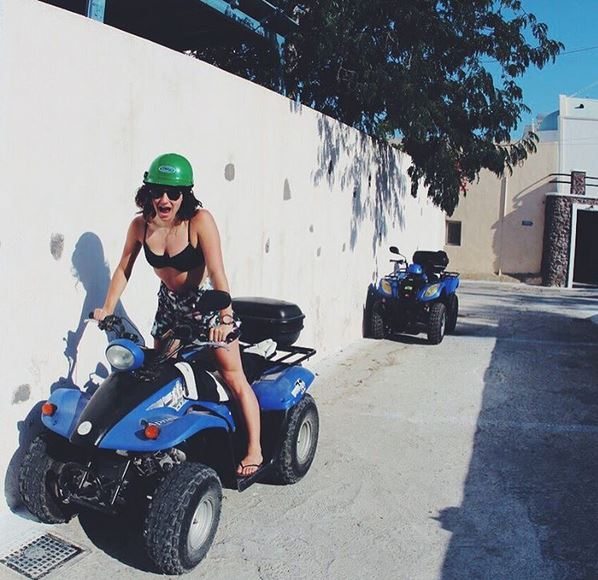 We didn’t actually do any partying on Mykonos – too busy sunning, eating and sleeping for that.

Originally I was only going to do one of the two islands as the only way to get to Croatia in time was via a boat and five buses over two days as flying from Athens was horrendously expensive. I didn’t really want to waste precious time in limbo so I did a quick search online and luckily there was a relatively cheap flight from Santorini to Croatia – so Santorini we went! 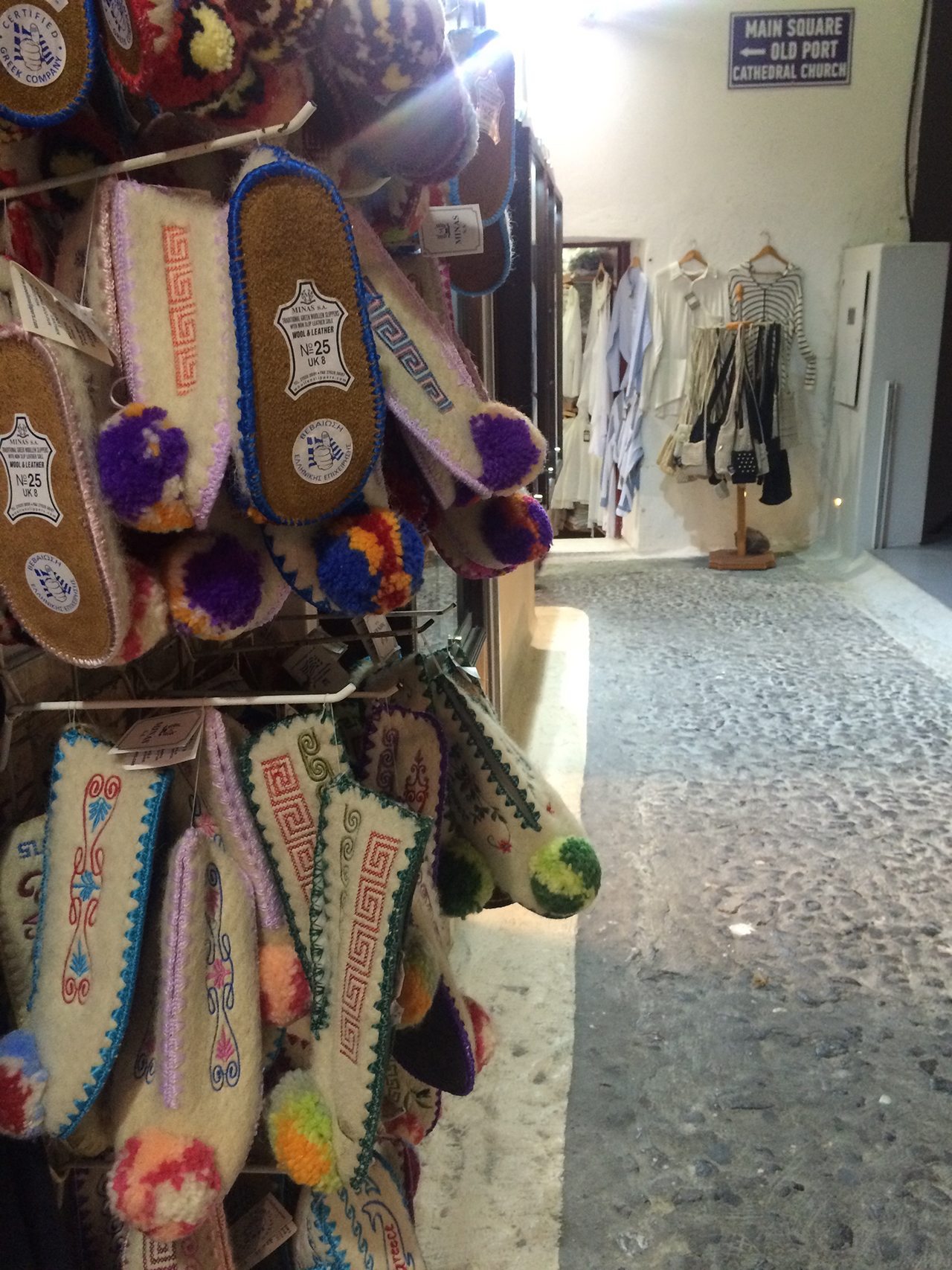 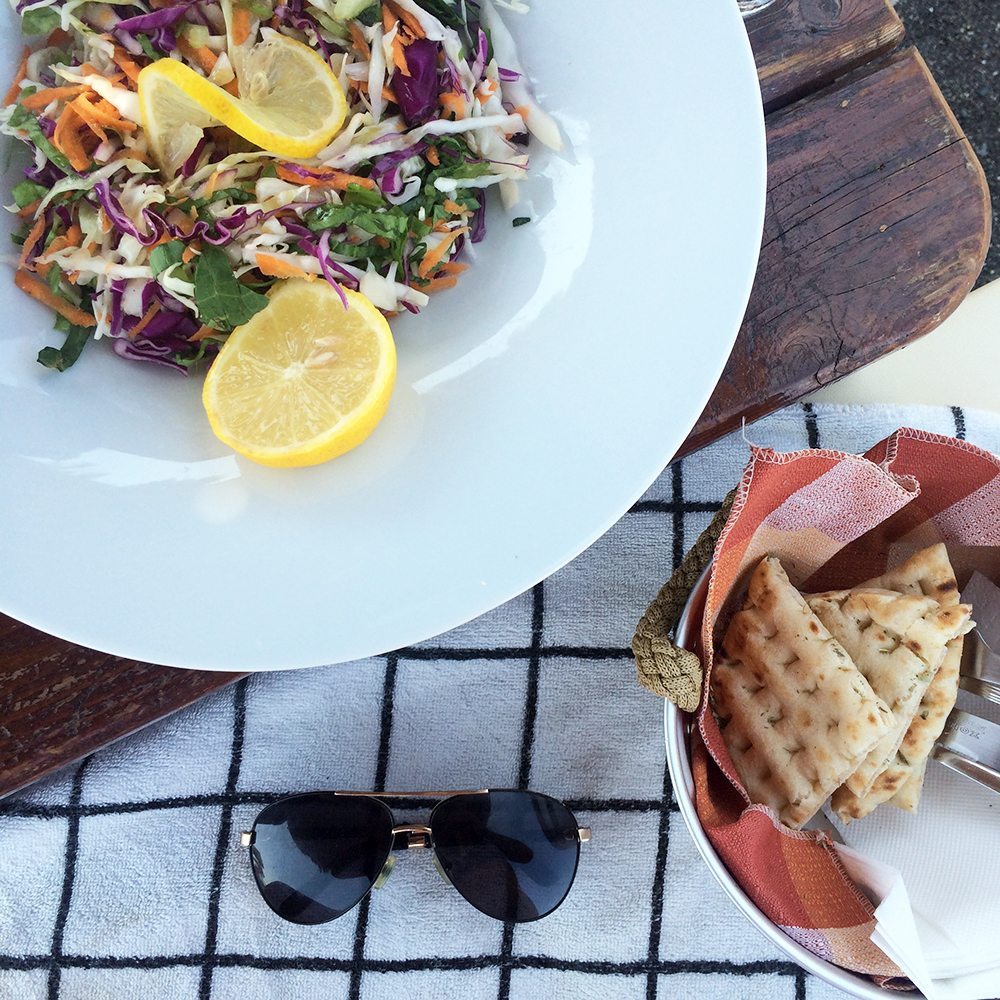 Santorini was a dream – four days luxuriating beach side – every day we would “pull up a pew” and drink ice coffees on the beach lounges in between dips. At night time there was markets with lots of cute things – I loved the traditional National Guard slippers

Dinner was also the delicious and dirty gyros – they didn’t do much else to be honest! We went to this kind of hipster gyros place called Bagiatiko in Fira where they had impressive looking salads on the menu and cool looking swings for seats which made me think of home. So I ordered a salad thinking it would be pretty awesome but the guy refused to make it for fifteen minutes as the customers who ordered gyros took priority – then when I arrived it was basically lettuce and sundried tomatoes – completely underwhelming and lesson learnt – you don’t make friends with salad in Greece! 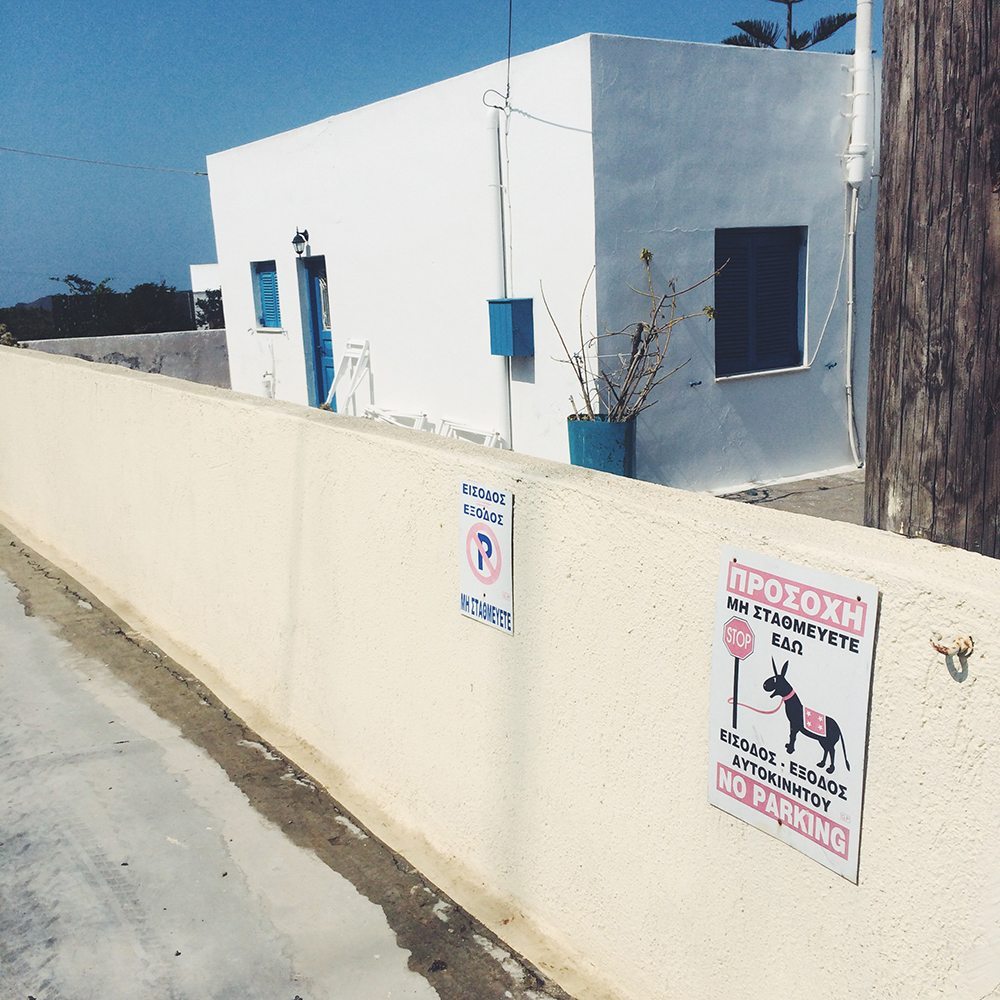 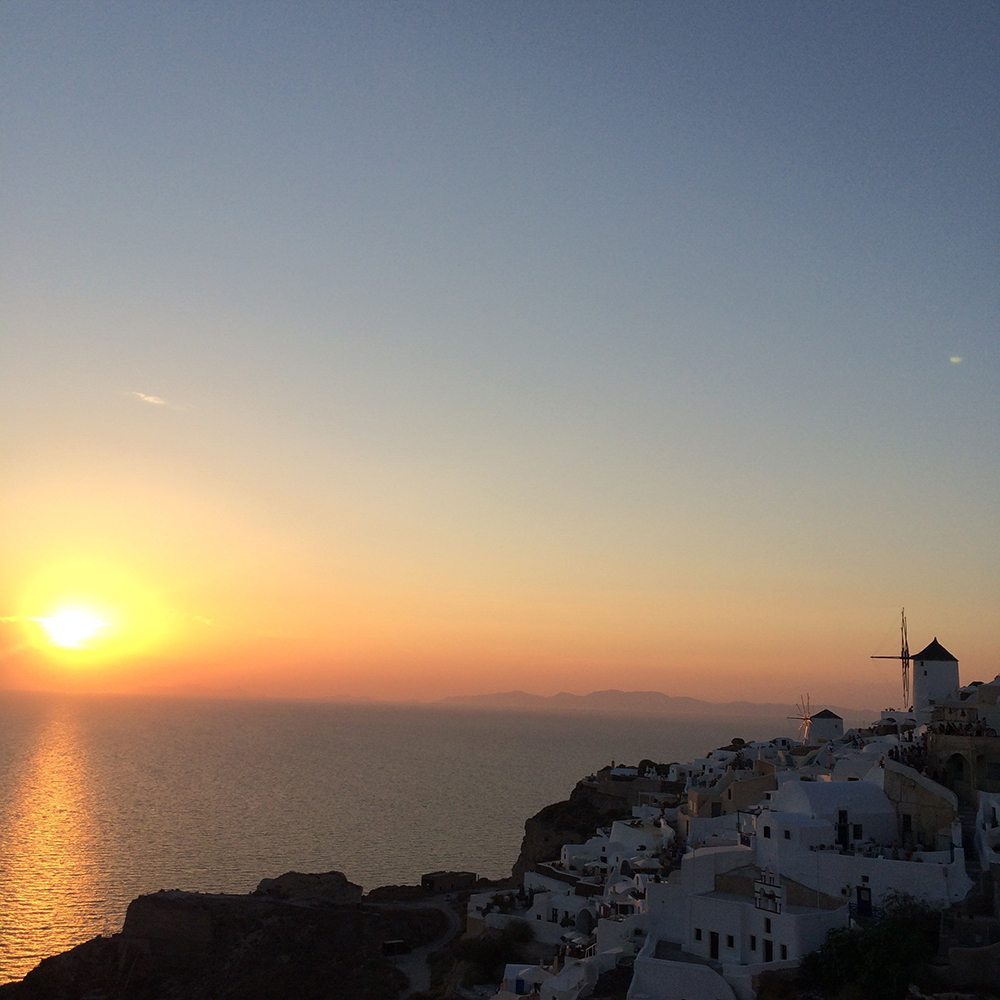 Just like in Mykonos we got a quad which was invaluable for getting around Santorini. We managed to get to Red Beach (overrated if you ask me!), Oia (best sunset in the world!), Perissa (the famous black sand beach)and Fira (way too beautiful for its own good) – adventures which would be impossible to fit in if we relied on the bus. Even if it takes an hour to get to the other side of the island there is plenty to see during the ride such as donkeys, grape farms, sea views, boats and people. My favourite thing was to muse over how all of the little white houses on top of the mountains looked like snow. 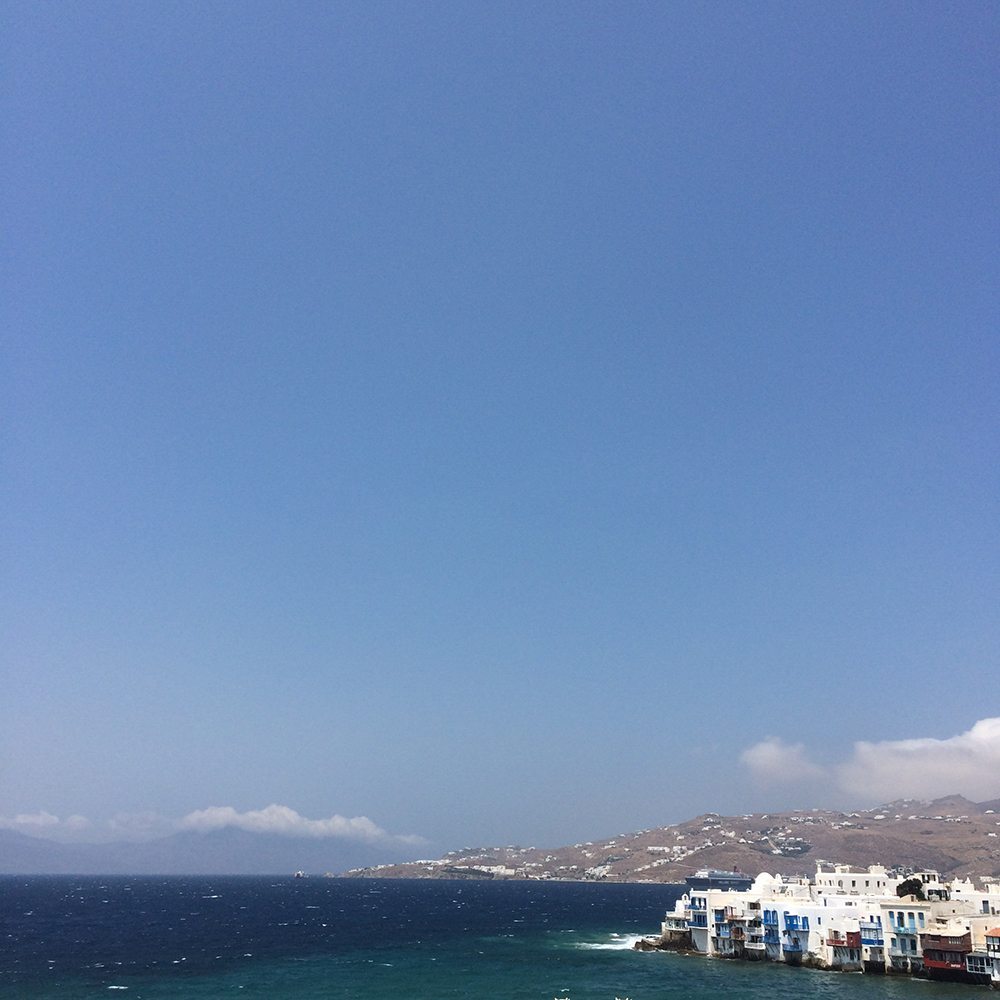 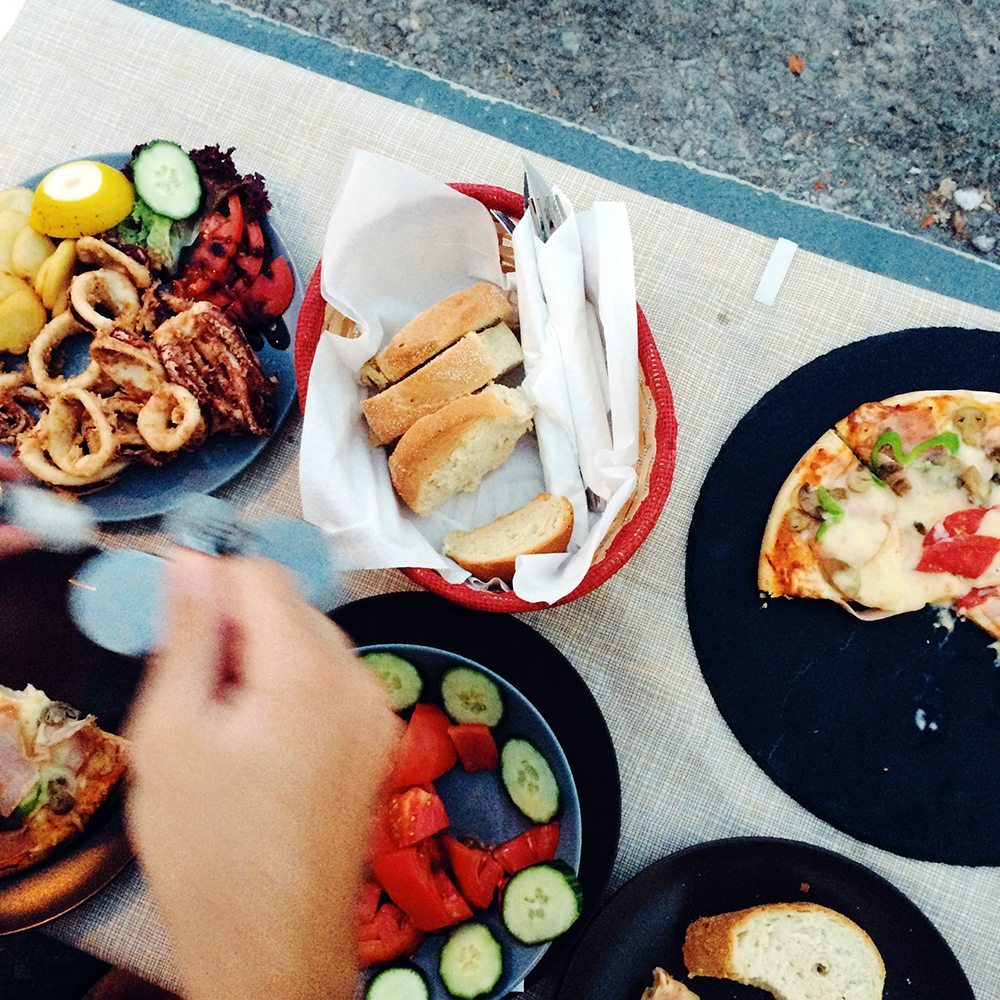 The quad actually ran out of gas on the last day as we were being too cheap to top it up more than €3… ops… Luckily there was another quad rental place nearby. The way it works is when customers return their quads; the rental places suck out of the gas and put them in bottles for later use so when a customer rents the bike the tank is basically on empty. A bit of flirting and we managed to get 1.5litres of gas (delivered in a water bottle!) which we walked back to the car. The good man decided not to charge us because I have “beautiful eyes”. Oh bless – gas and compliments, that’s what we like to hear! 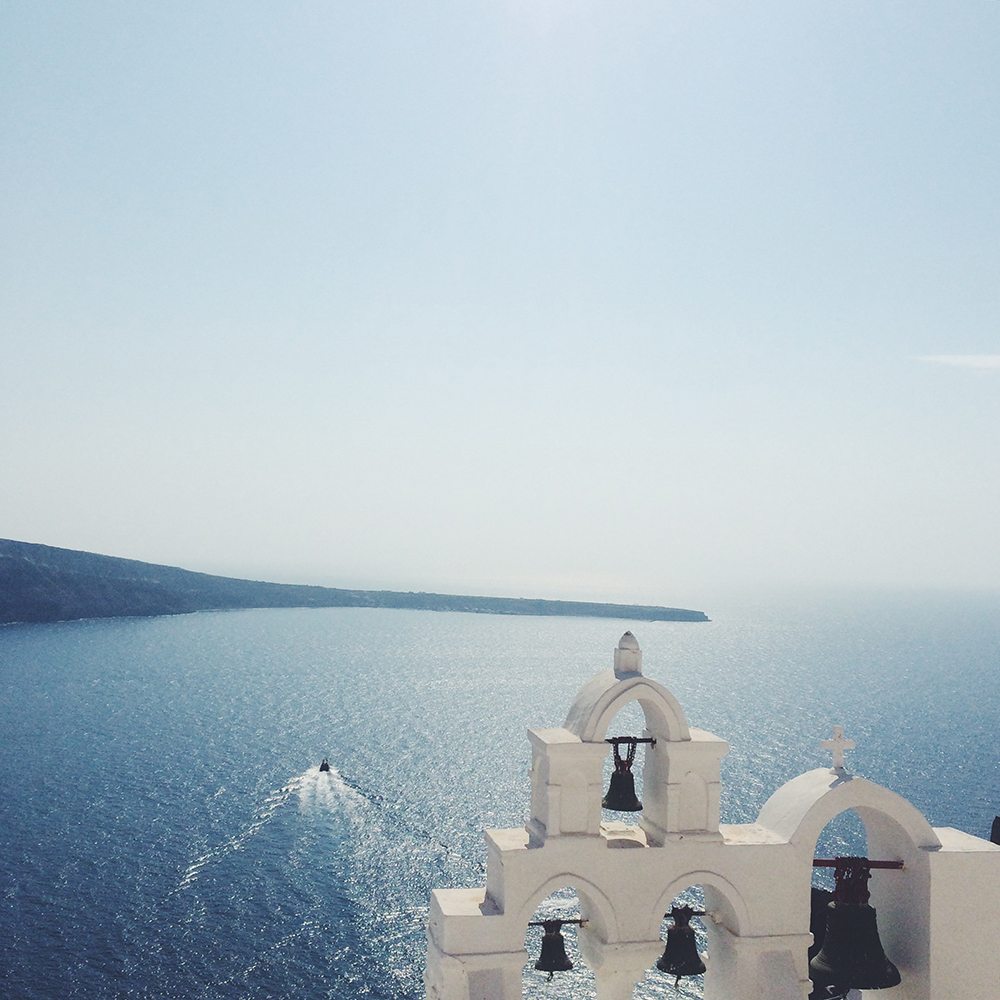 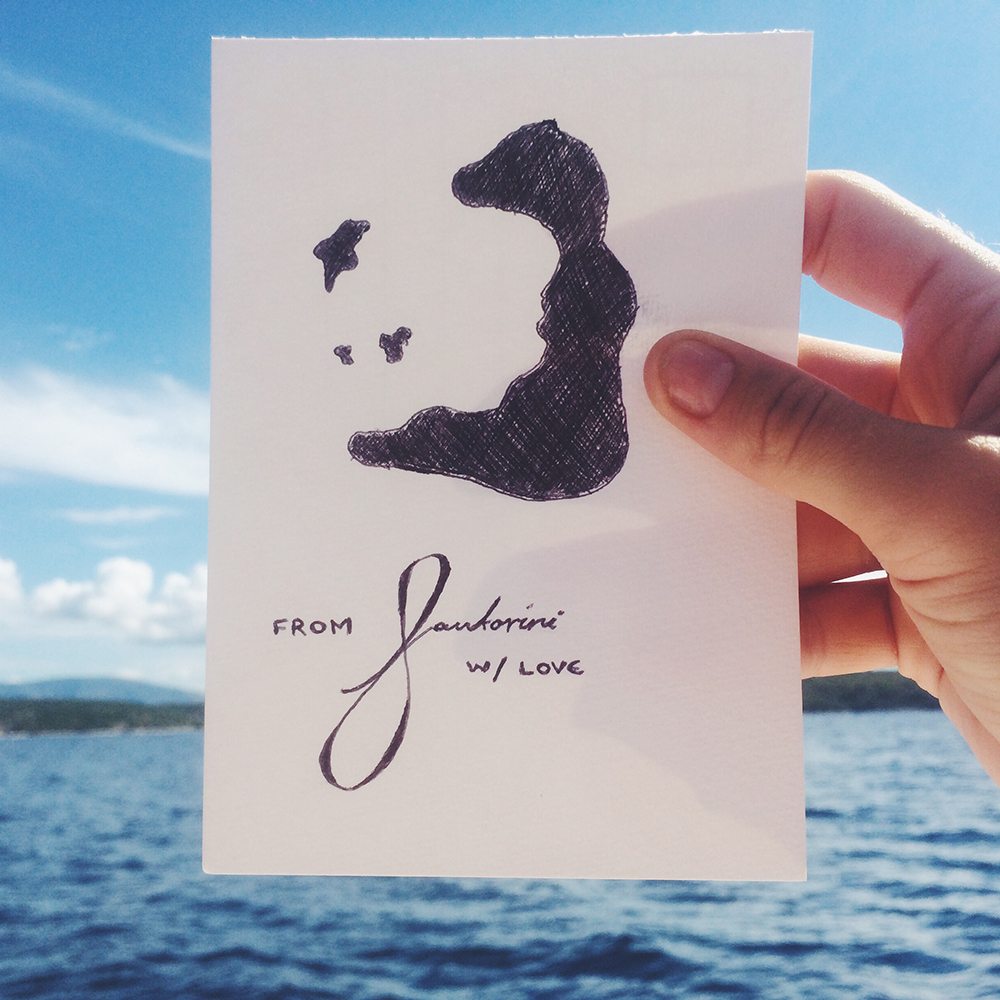 So… the question remains.. SANTORINI OR MYKONOS?!
Santorini was indeed a stunning vibrant island. For me I agree with my Insta followers – there is just something so magical and beautiful about it that nothing in the world can quite compare. I would recommend doing both.. But as they said – do Santorini if you can only pick one!

I loved Santorini so much, I drew a postcard of the island and sent it to one random viewer.

In case you are wondering.. I never did complete that Sudoku, but I’ll finish this by being cheesy and say Santorini completed me instead ^__^.

One Night At AthensWas Where the World’s Your Souva